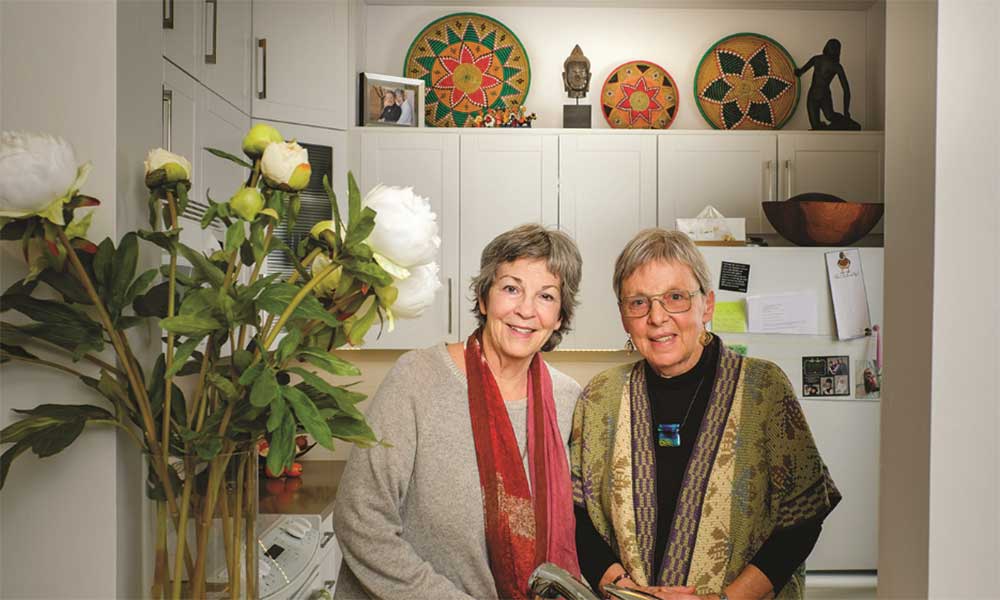 “You never know what’s possible until you go beyond it to the impossible.” Those words were on a sign that hung in Clasina van Bemmel’s office for many years, acting as inspiration. More than that, the statement encompasses her life philosophy and has eventually taken her down the path to setting up the Compassion in Action Fund at Vancouver Foundation, supporting the most vulnerable women and children from urban centres in B.C.

This is far from the first cause of this kind that van Bemmel has supported, but for this vibrant 73-year-old, the Fund, which will operate in perpetuity to provide support beyond her lifetime, is the final step of what has been a challenging, often painful, often fun-filled and fascinating life.

“The Fund is about me using my own experiences to provide others with the help to meet life’s basic needs,” she says.

Van Bemmel speaks from experience. Her own history, which involves a heartbreaking tale of child abuse, is what made her into a fighter – at one time for herself, and now for other women in need who are fleeing domestic abuse and violence, are impoverished, suffering from elder abuse, and are incarcerated or transitioning from prison.

“In these situations you either fight and come out the other side, or you become a victim of circumstance. But how can you even start to fight without having the basics like food, safety, and shelter?”

“In these situations you either fight and come out the other side, or you become a victim of circumstance. But how can you even start to fight without having the basics like food, safety, and shelter?”

At the age of 16, van Bemmel escaped from her abusive family life in the Netherlands and moved to England to become a nanny. “What I didn’t realize until much later was that looking after these children was a way of re-nurturing myself. It also gave me the building blocks to be able to nurture others.”

Despite having left school at Grade 7, van Bemmel was always determined to make something of herself. “I decided I was going to learn four languages, so I did. I worked as a nanny in England, Germany, Switzerland, and eventually France, which is where I was given the opportunity to work for Club Med as a tour guide.”

With a wealth of life and work experience in her pocket, she moved to Vancouver in 1975 and nine years later started a tour company that would eventually evolve into The Vancouver Trolley Company. “Initially I only had an old orange economy car that I used as a down payment for my first 11-seat passenger van,” laughs van Bemmel. “Trust me, I can be very persistent!”

This persistence has paid off on numerous occasions. There was the time van Bemmel wanted to place trolley stops across the city, and visited City Hall every day until they finally conceded. She has fought in court on multiple occasions for what’s fair, and has twisted the arms of high-level city and government officials to “do the right thing,” which oftentimes included educating people to causes that are close to her heart.

“What I didn’t realize until much later was that looking after these children was a way of re-nurturing myself. It also gave me the building blocks to be able to nurture others.”

Throughout her life journey van Bemmel has never forgotten where she came from and what led her on her own road to recovery. She has supported numerous charities all over the world, including the Elizabeth Fry Society of Greater Vancouver and the Downtown Eastside Women’s Centre (both recipients of funds from the Compassion in Action Fund and organizations she has supported for some time), all the while listening to what is required and having the flexibility to adapt accordingly.

For van Bemmel, it’s now time to take more of a backseat, “so that when I am gone the Fund can branch out to continue to assist the needs of women, whatever those needs may be.”

Today, with the continued support from her life partner, Toni Stovel, van Bemmel reflects on life and how grateful she is; for the life she was given, the experiences she has had, the opportunities she seized, and for never giving up. “It made me who I am today.

Having those experiences made me fearless, they allowed me to empathize with others in a similar situation and hopefully provide them with the tools to succeed.”