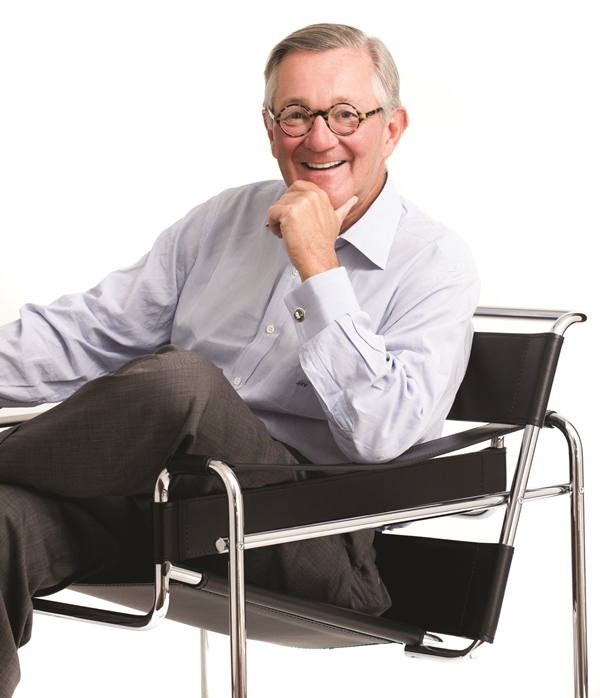 In the film classic Citizen Kane, the “do good” idealism of the lead character, Charles Foster Kane, fades as his business empire burgeons.

Like Kane, local forestry titan Jake Kerr built an impressive business empire. Kerr masterminded the success of his forestry company Lignum, and was Canada’s chief negotiator on the softwood lumber deal with the US. But unlike Kane, Kerr’s idealism—and philanthropy—has only escalated, particularly in recent years.

Three years ago, Kerr became the chair of Vancouver Foundation. Last year, he was named founding Chancellor of Emily Carr University of Art and Design. More recently, Kerr joined the board of Streetohome, a new foundation that involves the business community in tackling homelessness.

Why the ever-expanding philanthropy portfolio?

“It’s producing better returns than my stock portfolio at the moment,” Kerr quips, in his stylish office at Lignum Investments, where he serves as chairman. Then he shrugs, getting more serious. “People know me as a business guy. But I’m also a citizen of a community. This is where I made my money, made my home, raised my kids. My community has given me a lot, and it’s time to give back.”

Not that Kerr ditched his business smarts when he became more engaged in giving.

“I’m not really joking about the returns. It’s still about return on investment, for me. Vancouver Foundation, for example—they produce great ROI, which is why I am so involved with their work,” Kerr says. “They’ve been around for 65 years, so they have knowledge, and they really work with the community, so what they fund gets results. They work all across the province, and they tackle everything that communities need to be healthy, from arts to education to health care to the environment and children and youth.”

“Actually, sometimes the ROI they get is right off the charts. I’ve started telling this story about this guy, Doug Harder,” Kerr continues, leaning forward confidentially. “Vancouver Foundation gave Doug $500 to start a model-making workshop for local kids, making models of cars from kits the old fashioned way. This is in Edmonds, in Burnaby, which is actually one of the poorest postal codes in Canada. It has a lot of new immigrants and families living in poverty.”

“We gave Doug $500 and he starts this free workshop … and it totally caught on. Now he’s got 30 kids at a time building models. These kids are staying out of trouble, being creative and getting a sense of accomplishment. They’ve developed patience and concentration. One teen quit doing graffiti and started working part-time so he could buy his own model kits. So what’s the ROI on that money? That kind of stuff strengthens communities from the ground up. For $500, you get something priceless.”

Kerr clearly likes serving on high-profile boards, providing leadership and strategic advice. But as the Doug Harder story illustrates, he also relishes seeing the tangible results of on-the-ground action. Kerr says that’s why he was also inspired to give on a different level, by starting his own endowment fund, also with Vancouver Foundation.

“A lot of people don’t really know about endowment funds, but it’s like having your own mini foundation,” Kerr explains. “Except you don’t have to be wealthy to start one. Vancouver Foundation makes it really easy; they deal with all the set up, and they’ll even let you know about innovative projects they think you might be interested in supporting.”

“Endowments are a way to have your cake and eat it too,” Kerr says, matter-of-factly. “Instead of just leaving money to a cause after I die, I get to make good things happen now, when I can see the results. Plus, my endowment will keep funding the causes I believe in long after I’m gone. Really, what’s not to like?”

“Banks and money managers are getting into setting up endowment funds too. It’s easy money for them,” explains Kerr. “But they just don’t have the same knowledge of the community and issues that Vancouver Foundation has. It’s ROI again; I just feel Vancouver Foundation provides much better bang for my buck.”

Speaking of bucks, there are fewer of those around everywhere these days, given the economy, and Kerr acknowledges that it’s been particularly tough for charities, which are facing unprecedented demand for their services just when cash flow is tightest. But Kerr says being involved in philanthropy during an economic crunch has been instructive—and even inspiring.

“Everyone’s natural reaction when times are hard is to batten down the hatches and focus on survival,” says Kerr. “And Vancouver Foundation could have done the same thing. The Foundation could have decided since our investments are down, we can’t give this year. But we wanted to keep giving, even if we had to give less, because we’re investing in long-term change. Like investing in those youth in Burnaby … $500 may seem like a drop in the bucket, but every drop creates a ripple, and it’s not long before those ripples start making waves.”

From the look on his face, it’s clear the idea of making waves—and positive social change—through philanthropy fills the energetic Kerr with enormous satisfaction.

In Citizen Kane, Kane ends his life fabulously wealthy, but deeply unhappy, isolated from the community around him. Citizen Kerr’s life is still far from over, but given his involvement with the community and his ever-growing passion for giving, this local business tycoon doesn’t seem in any danger of suffering a similar fate.