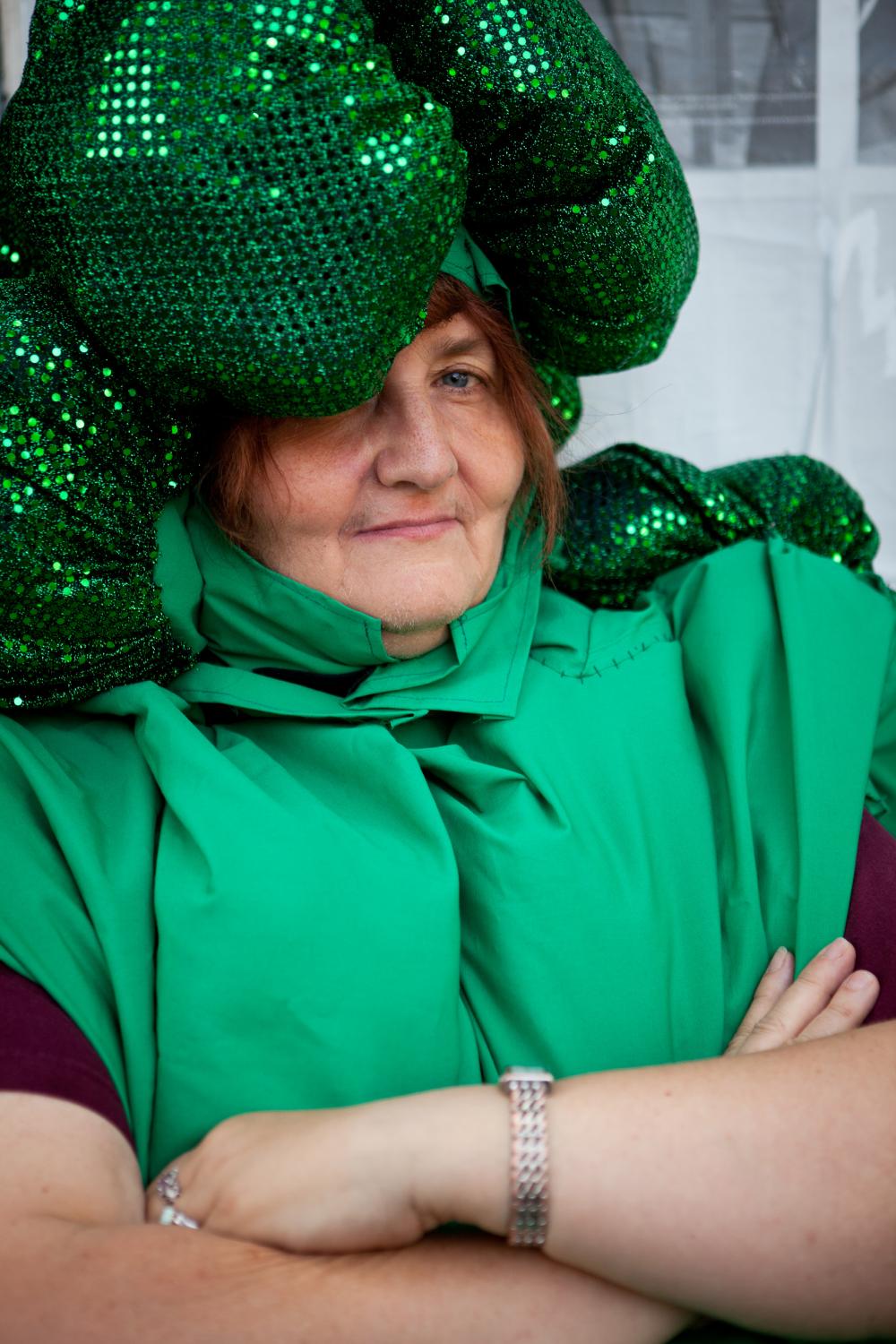 When a five-foot piece of broccoli starts talking, you listen.

Especially when the floret is dispensing nutritional advice in Vancouver’s Downtown Eastside (DTES).

“Did you know broccoli boosts the immune system, and helps fight cancer? That almonds can cure a headache? That red grapes are much better for you than green?”

It’s a tough crowd today. They’re all here at the Evelyne Saller Centre for the $2 meal and not keen on being harangued by a bunch of vegetables. But after a round of Food Jeopardy that would do Alex Trebek proud and a spirited rendition of food showtunes by an apple, an almond and water, more people drift over to watch.

This hour-long presentation is part of the “Downtown Eastside Kitchen Table Project.” Led by Potluck Café Society and supported by Vancouver Foundation, the project uses theatre, games and prizes to teach DTES residents about the importance of good nutrition and their right to quality food.

The delivery is charming, a little hokey at times, and funny. The message – for an audience that struggles with basic issues like food and shelter, and many of whom have HIV, Hepatitis C or are otherwise immuno-compromised – can be lifesaving.

Behind the costumes and behind the project are three people who know this neighbourhood, its residents, and their struggles intimately and are passionate about initiating change.

When Valerie Nicholson walks the streets of the Downtown Eastside, it takes her forever to get anywhere. “People are always coming up to me, saying hi, wanting to talk, giving me the latest news, checking in,” she says. Valerie’s patience, her willingness to lend an ear and dispense hugs have earned her the nickname of “Mum” in the DTES. This is her home. These are her friends. But it hasn’t always been that way.

I was living in Surrey raising a family,” she says, smoothing back a lock of red hair. “Had three boys. I was a special needs teacher, Red Cross disaster assistant, Scout leader, volunteered a lot in the community.”

“My husband and I had a business together. He was seriously injured in a car accident. He never recovered and our business died. He ended up going back to family in Ontario, basically in a coma. I never divorced him. I raised my boys on my own and started a new business myself.”

“But someone in my husband’s family got hold of our banking and credit information. They used it to buy a truck, new car, TVs, computers. And the creditors came after me. I lost everything, my business, where I was living. Even my kids’ bank accounts.” The words come spilling out of her and her voice chokes with emotion.

“I was in my 40s at the time. I lost everything. I came to the Downtown Eastside. Got a job at a fish plant and got introduced to drugs.”

“I contracted HIV. Got heavy into crystal meth. I just didn’t want to live anymore I guess. Then the place where I was living got torn down so I was homeless. I’d lost contact with my adult children. I wasn’t taking my meds. My nutrition was poor. I was living out of dumpsters.”

After almost three years in a haze, Valerie woke up. “I didn’t want my kids to know I was a drug addict so I quit, on my own.” Clean for two years, now she has an apartment, a job, and a mission.

“I live in the Downtown Eastside and I want to make a difference here. Potluck has given me that opportunity and in a positive manner.”

Out of costume, Jack Kilgour looks like he’s just stepped off the golf course: tall, casual, confident. He spent 20 years working in the training and human resources departments of large corporations. He had his own business as well – showing dogs and judging – that he ran on weekends.

“Basically, I was working all the time,” he says. “The dog show stuff was fun, but it was busy.” Jack was also wrestling with some powerful demons.

“I was battling mental illness – anxiety, bipolar disorder. I was also battling addiction – alcohol, drugs. I had a history of depression. I was just trying to keep it together.”

“About six years ago I crashed, really hard. I haven’t worked full-time since.”

“The one thing I learned during that time is that practicing humility is really a positive thing and asking for help is important.”

Jack started putting the pieces of his life back together, with help.

“I found a great psychiatrist, some great medical staff (Jack is HIV-positive), stable housing, and a social support network.” Out of almost 80 applicants, Jack and Valerie were both hired as outreach workers for the DTES Kitchen Table project. They work 10-15 hours a month, spreading the word about good nutrition.

“This job is keeping my spirits up,” says Jack. “And I feel a sense of ownership, a sense of belonging. When I come to work I really look forward to it.”

Potluck Café is located at 30 West Hastings, in the heart (or maybe the belly) of Vancouver’s Downtown Eastside. There are a dozen tables in the café, each adorned with fresh flowers. There are local paintings and photos on the wall. The space is bright, inviting, and spotless. One of the reasons why is Heather O’Hara and the Potluck team.

O’Hara is executive director of Potluck Café and Catering and seems to know everyone who comes through the door. She started here six years ago as a volunteer to help with the business planning. Now, as E.D., O’Hara is understandably proud of what Potluck has accomplished during her term and over the last decade. Potluck is celebrating its 10-year anniversary this year.

“There are not many safe and healthy food choices for lowincome people here in the DTES,” says O’Hara. “At Potluck, you can access affordably priced food and people feel welcome here. We also produce 30,000 free meals every year for lowincome residents in the DTES and we host a monthly community kitchen where 10-15 people learn about nutrition and how to cook.”

There are about 30 employees at Potluck. The café is actually only a small part of the operation. The real core is a thriving catering business. They do corporate and event catering for many downtown businesses. The profits from the catering side support the café, job creation and programs like the DTES Kitchen Table Project. The catering also allows Potluck to hire and train local residents from the Downtown Eastside, many of whom have serious barriers to employment.

“The kind of issues we see here in the DTES are poverty and everything that comes with that: low self-esteem; lack of faith in yourself; lack of opportunity; housing issues; a lot of mental health challenges like schizophrenia, bipolar disorder, depression, anxiety; and all levels of addiction.”

“I have always been interested in how business and entrepreneurial activities can benefit the world,” says O’Hara. “A social enterprise environment like Potluck is a perfect fit for me. Our mandate is community employment and community nutrition. We’re using food as a tool for economic change. And Vancouver Foundation has helped immensely.” (Vancouver Foundation has given Potluck and its programs 11 grants totaling almost $150,000 over the last 10 years.)

Back at the Saller Centre, Valerie and Jack are packing up. After the show, they work the crowd, shaking hands, greeting friends, passing out brochures and spreading the word about nutrition.

While the acting and the props may not be quite up to Oscar standards, Valerie and Jack more than make up for it with their enthusiasm and their passion, both for the subject matter and the audience. The delivery may be a little over-the-top, but that’s to be expected. After all, in this theatre, chewing the scenery is probably good for you. VF

If you want to find out more about Potluck Café and Catering, or if you’d like to talk to some broccoli, visit www.potluckcatering.com

If you want to support Potluck’s efforts to bring more nutritious food into Vancouver’s Downtown Eastside, call Vancouver Foundation at 604-688- 2204.