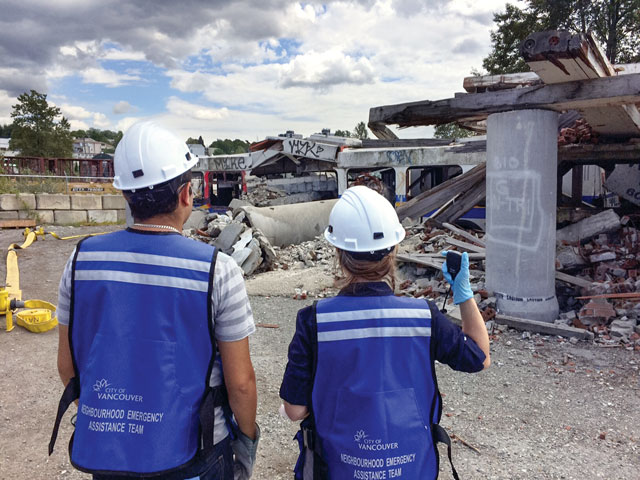 Grants at a Glance – part 2

Preparing for the Big One

Lourette Swanepoel works as an urban planner, and so she was very aware that her neighbourhood was lacking one key plan: earthquake preparedness. “I didn’t have my act together,” she says. “Everyone says they should but nobody does.” So in the summer of 2015, with a $500 grant from Vancouver Foundation’s Neighbourhood Small Grants program, Swanepoel and a troupe of volunteers set about preparing for a neighbourhood-wide drill. Around two dozen designated “champions” attended weekly training sessions as part of the City of Vancouver’s Neighbourhood Emergency Assistance Team program. They learned basic radio skills, how to provide medical aid, and what potential hazards lay in their area— from gas lines to large, unstable trees—that could cause trouble in a worst- case scenario. Their training culminated in an earthquake drill one Sunday last October that drew around 100 people over the course of the day. “Alarms went off, people had to duck and hold, we went to our muster stations,” says Swanepoel. The drill was a first step towards what she hopes will be a wider recognition that emergency planning isn’t solely the domain of the authorities— and that neighbourhoods like hers have an important social role to fill if disaster strikes. “I’d love to see a vision for Vancouver where we start to fill that gap between community-wide preparedness and individual preparedness and take care of that first-tier emergency response,” she says. “It could be three days before help arrives— what happens in those three days matters.”

During regular walks around her neighbourhood, Christine Nguyen often takes the time to notice things that other people don’t. Last year, she decided she wanted to share those stories and experiences. With a $100 grant from Vancouver Foundation’s Neighbourhood Small Grants program, Nguyen and her partner Amon Li set about planning a walk through her neighbourhood, from the corner of Kingsway and Victoria to the SkyTrain station at Broadway and Commercial.

Nguyen and Li began researching their neighbourhood, digging up stories both light (the ghost in the basement of a nearby elementary school) and serious (the fight to turn a polluted man-made ravine into a green space). After boiling down an almost five-hour proposal into a 90-minute walk, the pair started recruiting participants.

The walk was held in conjunction with the 100in1Day Festival, and they drew a diverse local crowd. “We had never met any of them before. Most were from the same neighbourhood and they wanted to learn more about the place where they live,” says Nguyen. She believes that the two tours offered her neighbours a chance to get to know their home, but perhaps more importantly, each other.

Read the latest edition of Vancouver Foundation magazine – The Nature of Belonging.,Check out Neighbourhood Small Grants.