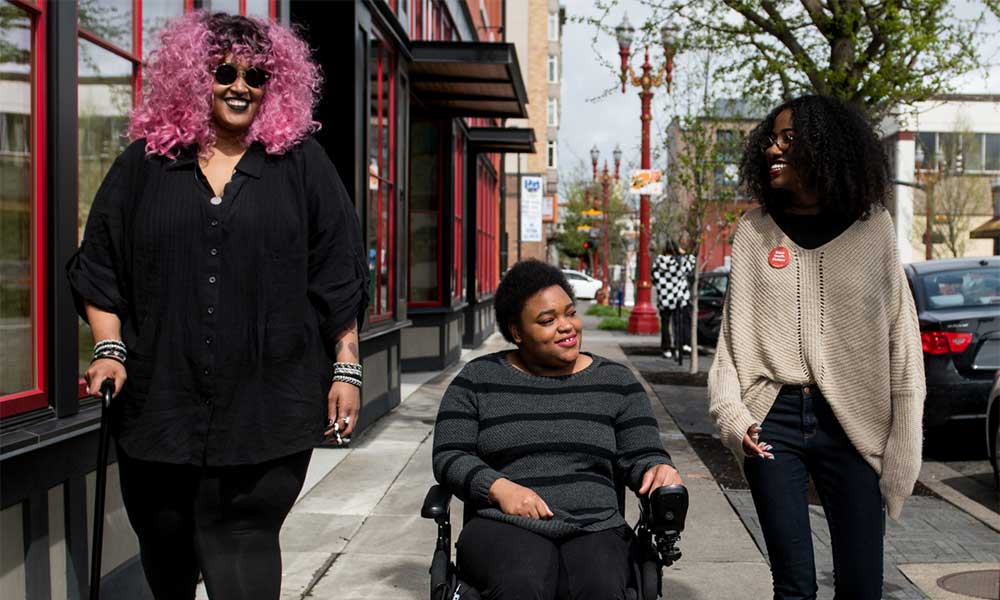 Much of grassroots work is necessarily focused on providing immediate relief to communities in need. Equally important is ensuring policies are put in place for the long-term security and stability of such communities. BC Aboriginal Network on Disability Society (BCANDS) and Disability Alliance of BC (DABC) are two organizations working independently and in collaboration to provide both direct, practical, everyday support and long-term systemic change for British Columbians with disabilities.

Currently, over 20% of the population of Canada (approximately 6.2 million) live with disabilities. According to Helaine Boyd, Co-Executive Director of DABC, there is a clear connection between disability and poverty. A significant number of the community lives in poverty at a rate 2x higher than the rest of the population. This number is even higher in Indigenous communities. Neil Belanger, CEO of BCANDS, cites a 2016 study that found an estimated 80% of First Nations in Canada fall under the poverty line ($20,000/year). It is this reality which fuels the work of BCANDS and DABC to tackle the systemic roots of poverty within disability communities through policy change and governmental support.

“What we really want to do is subvert the whole notion that having a disability…mean[s] that you have to live in poverty,” Boyd says. “There are still other ways to contribute to society. We really need to empower people with disabilities…They need to be very much upheld and supported so the rest of society adapts around them.”

Belanger gives the example of the Disability Tax Credit (DTC) — meant to reduce the amount of income tax paid and is a gateway to other benefits — which he calls “one of the bigger obstacles.” To access the DTC, people need to know about the credit, pay a healthcare professional to fill out the long application, and fees can vary as they aren’t regulated.

“When you’re living in poverty, whether it’s $25 or $250 you have to pay to have your application completed by a medical professional that’s a big chunk of money for you when you’re trying to figure out if you’re going to eat today,” he says.

Many of these issues can be addressed through implementation of standards and regulations at the governmental level, and streamlining and coordinating the process across different levels of government. Organizations like DABC and BCANDS often provide oversight to different levels of government and hold them accountable for ensuring benefits are applied holistically and in consultation with people with disabilities.

Years of experience helps position DABC and BCANDS to understand the things that governments miss. This includes the “additional costs that happen by nature of having a disability.” Boyd explains that the costs of medical procedures, equipment, and treatment can be astronomical and are not factored into these income supports. Additionally, she wants to see the new Canada Disability Benefit match, at minimum, the $2,000 monthly Canada Emergency Response Benefit (CERB) and factor in the additional costs of healthcare. The Access RDSP program is another way DABC and BCANDS aim to increase access and reduce poverty. In 2008, the federal government implemented the Registered Disability Savings Plan (RDSP) to address long-term financial security. Belanger sees this as a positive initiative for people with disabilities to be able to “save for future social, disability, health-related needs. If people are able to qualify for this program early and maximize their personal contributions, the RDSP can grow into significant saving for the future.”

However, he says there are parts of this program that are restrictive and inaccessible. “Unfortunately, people just don’t have the money to put in with rent, transportation, [and] needs related to your disability [and health]. It’s very hard to put away $1,500 a year to maximize your benefit.” There are also issues around when older applicants are able to access this money. Belanger says BCANDS has made a number of recommendations to the federal government and is working with them to reduce these barriers.

DABC and BCANDS’ ultimate goal is to work with governments to create a program like Guaranteed Income Supplement (GIS) for seniors or the Child Benefit Tax for people with children. Boyd says, while there is income assistance, “there is no dedicated income stream for persons with disabilities in Canada.” Implementation of this program will ensure people with disabilities achieve autonomy and independence.

Boyd says, “The value in having organizations like DABC provide [policy and advocacy work] is it makes sure the government is accountable for what they do. Because governments change and it’s really important that there are grassroots civil society organizations that can hold the government to account to make long-lasting change that will affect the lives of many people in our province.” Already, they have successfully advocated for the inclusion of the term “disability” in the Charter of Rights and Freedoms, helped establish the Guide Dog Act, helped implement the Employment Assistance for Persons with Disability Act, and were involved in the Accessible BC Act. BCANDS also sits on multiple federal committees and advises the federal government on numerous initiatives.

An important aspect of BCANDS advocacy includes looking not only at the links between disability and poverty, but also examining how Indigeneity fits into this. For people living with disability, the stigma they face while trying to obtain employment is already high. Employers may see disability as a financial strain and may be unwilling to make accommodations. This stigma is compounded for Indigenous people, who already face systemic barriers in Canadian society. BCANDS has worked with governments to deem November Indigenous Disability Awareness Month. It also works with First Nations across the country and undertakes research initiatives to better address the needs of Indigenous communities.

Shortly before the election, the federal government announced a National Disability Inclusion Plan meant to access federal disability benefits more easily. DABC is concerned, however, about whether the government will follow through with this plan. The plan involves a 3-year consultation process which BCANDS sees as too long. Because of the briefs that BCANDS and other organizations have submitted to government, Belanger says, “For us, the answers are already there.”

The launch of the Disability Without Poverty campaign is in recognition of two things: people with disabilities need to be spearheading the movement and governments will not take disability rights seriously without mobilization from the rest of the public.

”I think people believe that persons with disabilities should be supported. They just don’t understand that the current levels they’re being supported at are never going to help them move on, go to school, get a house, this kind of stuff,” he says.

Belanger believes what’s needed are public awareness and education campaigns from governments. He explains BCANDS has made a number of recommendations in this regard, such as the implementation of an Indigenous disability competency program for both employers and employees.

Boyd echoes this sentiment but believes this movement also needs to come from the public pushing governments to do more. “What we need is large, mass public support as well. I think that’s what will then instigate political will for this to happen.”