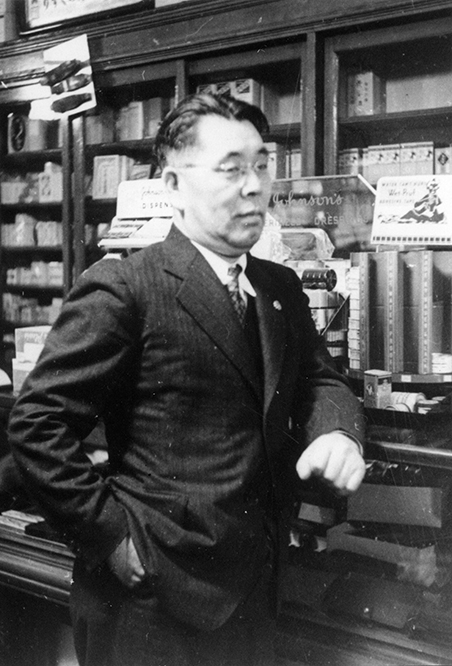 As a toddler, Larry Wong would wake each morning to the staccato rhythms of his father’s Singer sewing machine. By the afternoon, he would be crawling on the floor, playing amongst clippings of silk fabric and discarded cotton thread. He remembers his father’s slippered feet that furiously pumped the machine’s cast iron treadle.

“My father owned a tailor shop. He made men’s shirts and sold women’s lingerie,” Wong recalls of growing up in the 1940s and ’50s in Vancouver’s Chinatown. “He could make a shirt in three hours.”

The small store was on Main Street between Hastings and Pender. In the front, it welcomed customers with glass display cases and bolts of fine fabric. In the back, it housed a cramped workshop and tiny living quarters divided only by a flimsy curtain.

“It was a narrow place,” Wong chortles, as his hands illustrate how tiny the space was. “We had a sofa bed in the workshop. And there was a wooden ladder that led to the mezzanine level, which had a mattress. We took turns sleeping up there.”

It was a humble beginning. And a sad one. When he was only 18 months old, Wong’s mother died suddenly of an asthma attack. With a big age gap between him and his older siblings, Wong often felt like an only child in those early days, spending long hours on his own. His father, who never remarried, worked hard to run the business by himself while raising his young son.

“My father would work all day, cook me dinner, then at seven in the evening a friend of his would come over, and my father would head off to another job at a confectionary store,” Wong recalls. “He wouldn’t get home until after midnight. I think he was lonely.”

Some nights his father would sneak back home with a special treat. In a deep sleep, Wong would be roused out of bed and tempted by the smell of chow mein his father had picked up at a local, late-night eatery. “I would eat with him, but I was so dozy,” Wong remembers with a chuckle. “The next morning I would come down for breakfast and would not remember I had eaten just a few hours before.”

That memory, and many others, has been captured by Wong in his 2011 autobiography, Dim Sum Stories: A Chinatown Childhood.

A historian and some-time museum curator, Wong is also a natural storyteller. The youthful looking 74-year-old is a master at capturing the attention and imagination of his audience. When he tells a story, Wong becomes so animated he can barely contain himself. Every part of his stout body plays a role: his voice rises and falls with excitement; his head bobs up and down eagerly; his eyes grow large and then suddenly contract into crescent moons; his hands cut the air to make a point. He’s like a marionette, and the story is pulling the strings.

Even when he is sharing some historical fact for the 10th time, Wong will describe it with as much energy and emotion as if it were the very first telling. He often punctuates his sentences with snorts of laughter.

Occasionally, however, talking about history will make him solemn, even sad – like when he reminisces about his mother. Her loss seems to haunt him to this day. Two pictures of her adorn his otherwise bare office walls – like small shrines placed with great care. These are Wong’s treasures – images of her from around 1938 (the year Wong was born). In one image, a family looks at the camera and in the centre of the shot is a slender, attractive woman – hair tied back and perched elegantly in a chair with an infant Wong in her arms. In the other image, only Wong and his mother fill the frame.

“Her remains were shipped back to China on the Empress of Asia, the same ship that brought her to Canada,” Wong says soberly, without the usual glint in his eye.

After a long pause, Wong sighs and turns the topic to the many jobs he has held. The energetic storyteller returns as he recalls life as a teenager in Chinatown. His first job was in a bowling alley, working as a pin boy. “I was responsible for two lanes. I had to jump down and reset the pins each time someone hit them. Boy, it was a noisy job.”

Later, Wong earned cash in a used car lot, washing cars inside and out. “I learned there is a sequence to washing a car,” Wong explains, his hands making circles as if polishing the air. “And I still wash a car the same way to this day.”

After that, he sold ads for a local newspaper. Eventually, Wong saved enough to enrol in university, but dropped out after only two years. Unsure of what he wanted to do, he accepted a job at the post office sorting mail. Over the next few years, Wong worked his way up the career ladder and discovered he had a knack for numbers and for sleuthing. He eventually became an internal auditor for Canada Post, and then later with the federal government.

Despite the distractions of a busy career, Wong found himself continually drawn to the stories of the past. “I remember reading Lawrence of Arabia when I was in public school. I loved it.”

Years later, his interest in history was reignited when Wong went looking through immigration records to learn about his mother. As he uncovered more about her, he also learned about the difficult early history of the Chinese in Canada – the 1907 Riots, which saw parts of Vancouver’s Chinatown vandalized; the hefty head tax that applied to all Chinese wanting to come to Canada; followed in 1923 by the Exclusion Act, which banned most Chinese from immigrating; and lastly, the fact that even Chinese who were born in Canada, like Wong himself, were not considered Canadians citizens until 1947.

“When I was a young, I didn’t want to be Chinese. I wanted to be white. Or what we called back then ‘English.’ ” But learning more about his Chinese heritage, Wong not only became hooked on history, he also found himself drawn back to his culture.

In 1994, Wong retired and threw himself into volunteering with various history groups. He helped establish both the Chinese-Canadian Historical Society and the Chinese-Canadian Military Museum Society. He interviewed elderly Chinese residents and war veterans to record their stories. He appeared in several documentaries and wrote articles. He arranged for exhibitions of artifacts and photographs to help showcase the story of Chinese-Canadians. And last year, he finished his memoir of his Chinatown childhood.

But the death of his last remaining sibling, just before the book went to press, profoundly shaped Wong’s thinking about the future. He knew he needed to plan. “I never married and I don’t have any children, but I do have some savings and my condo is worth something. I need to do something with this money when I go and what’s better than dedicating it to something I care about?”

Wong worked with Vancouver Foundation to create a legacy fund. He discovered that such an endowment fund would be simple and inexpensive to set up. And he didn’t need to be wealthy to create his own endowment fund.

Wong learned he could establish the fund now with a deposit of $1,000, and the remainder of the funding could come from his estate after he passed away. What’s more, through a Letter of Wishes, Wong could provide clear direction to the Foundation on how the money was to be used – in this case for a University of British Columbia history project. However, at any time Wong could change how he wants the fund to be used without having to go back to his lawyer or change his will. He could simply change his Letter of Wishes at no cost.

As Wong knows so well, history is about the threads that link us to yesterday; how the past affects the present and shapes the future is often open to debate. But Wong is leaving no room for interpretation of his past. He knows what his legacy will be, even before the story is finished.

Want to help preserve the past for future generations? Start with a legacy fund. Visit our website at www.vancouverfoundation.ca or call Kristin Helgason in Development and Donor Services at 604-629-5186.