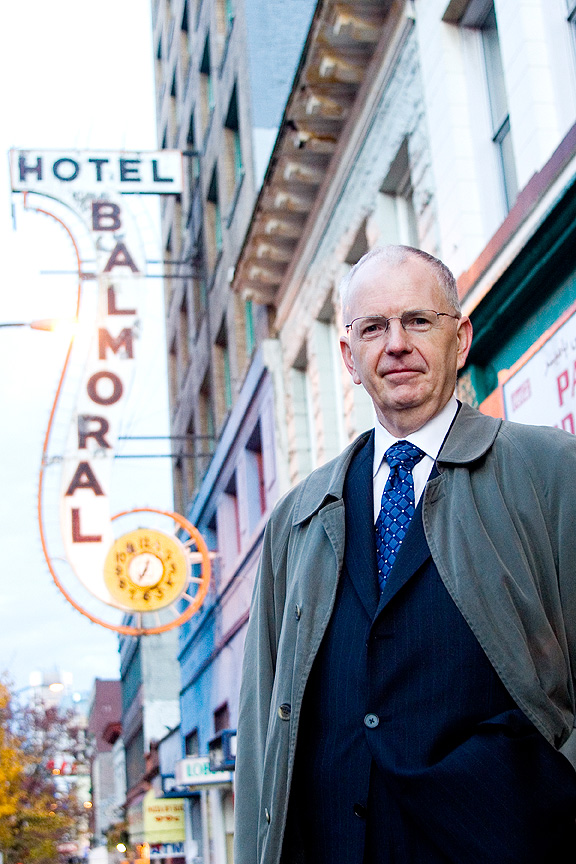 “You never know how lucky you are until you’ve been unlucky,” philosophizes the 59-year old Vancouver businessman as he recounts the day when, as a 13-year old, his home burned to the ground in rural Cape Breton.

“Our family had no insurance and so we truly lost everything in that fire.”

Losing everything meant accepting anything. The five children, as well as Murphy’s parents, were forced to stay wherever they could find a bed. For two years it meant a lot of moves and often bunking in the home of strangers while their parents stayed in some other location.

“It took me awhile to get accustomed to having nothing and having my past life completely wiped out,” Murphy recalls. “For about two to three years after I would recall a toy or a book that I had once owned and would want to go looking for it. Then I would remember it did not exist anymore: it had been lost in the fire.”

The local, rural community was critical in helping the Murphy family survive such a devastating loss. However, what struck Murphy, even at that tender age, was how people could react so differently to someone else’s tragedy. How some people would do nothing, while others would automatically ask “how can I help?”

Murphy describes how neighbours responded as the fire swept through the 150-year old house. “Some people just froze when they saw the house on fire, and others managed to do heroic deeds.”

One couple ran into the blazing house and managed to heave the deep freeze through a window.

“When it came out the other side, a group of men could barely move it because it was so heavy. But somehow this couple had managed to lift it and push it through the window on their own.”

After two years of being homeless, the family did eventually save enough to rebuild their house.

Then tragedy struck gain. Murphy’s father became ill and was forced to stop doing any work on the farm for an entire year.

“We don’t know if he had a breakdown that caused a heart attack or a stroke, but for one whole year he had to cease doing any farm work.”

For the teenaged Murphy, the eldest child, it meant taking over the farm work while also going to school and studying.

After graduation, he went on to study chemical engineering but didn’t like it and eventually made his way west.

It was in Vancouver, during a period between odd jobs, that Murphy found himself with nearly empty pockets and forced to move to a single room occupancy hotel (SRO) in the rough part of town.

“I rented a little room and the washroom was down the hall which I shared with everyone else on the floor,” recalls Murphy.

It was there that Murphy rubbed shoulders with people and problems that he had never before encountered: alcoholics, drug addicts, sex trade workers, the unemployed and criminals all mingled with Murphy in this new world.

“After a while it started to seem normal to have all this chaos around me,” said Murphy. “You start to accept things that at one time seemed disagreeable.”

After several months, Murphy came to the conclusion that if he didn’t get out of the situation, he may never leave.

After spending some time in Alberta, he met the love of his life, Gloria.

Together they now own Murrick Insurance Services, which offers insurance and financial services and operates in seven locations in the Lower Mainland. They are also proud de facto parents to their nephew Stephen whom they raised after another family tragedy.

“Until you have been homeless or until you have lived in these difficult environments you don’t really know what it is like to struggle out of it.” —Floyd Murphy

Today, Murphy’s life seems a million miles away from the ups and downs of his early years.

But the influence of those difficult experiences is evident in dozens of ways.

It is clear Murphy feels a tremendous debt to community. He knows first-hand the power that community has to help people during the bleakest of times. And so today Murphy volunteers countless hours to various charities and community projects.

He is on the board of Vancouver Foundation (representing the insurance industry), chair’s the Foundation’s animal welfare committee, and recently established his own endowment fund with the Foundation to help ensure he can still make a contribution to the community long after he is gone.

More than anything, Murphy has a particular soft spot for those who had to begin life behind the starting line, so ten years ago he joined the board of Special Olympics BC.

Murphy’s memories of being homeless and his experience of being forced to live in an SRO means he has some strong opinions on what needs to be done to address the issues surrounding addiction and homelessness.

“Until you have been homeless or until you have lived in these difficult environments you don’t really know what it is like to struggle out of it,” Murphy states.

He believes that when people want to break the cycle of addiction, they need to be offered a new environment too. And that means having opportunities to find housing in other neighbourhoods – away from all the temptations.

“Otherwise,” he explains “it is like trying to help someone quit smoking but then putting them into a room with other smokers and leaving a pack of cigarettes on the table.”

“I especially believe that young people need to be offered a way out, before living on the streets or staying in shelters becomes a way of life … the new normal … for them,” Murphy adds.

As he approaches his 60th year, it doesn’t look like Murphy has any plans to slow down. If anything, he seems to be even more engaged in the issues facing the community.

Murphy continues to ask himself “What can I do? How can I help?”
Some would say that with all he has overcome, all that he has accomplished, and with all he has given, Murphy is really a very lucky man. And we, in turn, are one lucky community to have him.