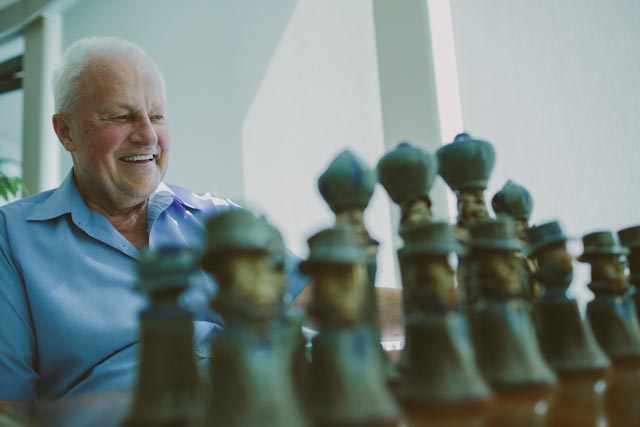 At the end of the rainbow

Bill and Manny are enjoying their retirement. They both worked hard and invested their money wisely – Bill was a chartered accountant, and Manny (who trained as a miner in Germany) worked in the mining industry, and eventually liquor distribution.

Now, at 68 and 72, they are reaping the benefits: a beautiful apartment where they live comfortably – not ostentatiously – and the chance to indulge their mutual interest in travel, gardening, opera and art.

Bill and Manny love to travel. They have taken dozens of cruises together, and are planning their next trip – to circumnavigate Australia this year. Their apartment is filled with photo albums and memories of their voyages.

They are a delightful couple. Bill usually does most of the talking, as Manny is more reserved. But bring up cruising the Aegean or visiting Luxor and Manny lights up with stories of their trips together. With a shock of white hair and his tanned healthy face, Manny is suddenly incandescent. Bill laughs and ribs him for it. There is still genuine affection between the two, even after almost 40 years together.

Life is good. But both men have friends, and friends of friends, who are not having an easy time. Singles and couples, gay, lesbian and straight, who have not made even the most basic preparations for their “golden years” and are now struggling financially.

“That’s why we decided to start the Rainbow Fund,” says Bill. “It started with our first Will together, on November 6, 1994.” (He rattles off the details as if it were yesterday). “We had made money on a couple of properties, and were thinking ahead about what happens to this money when we die. “We have no children, and we didn’t want to give money to relatives who we rarely see. We thought of setting up a private foundation. But that proved to be too much work. Then, in 2008, the Will needed to be looked at again. And by that time our plans had become clearer.”

“We had some older friends, and thought ‘What’s going to happen to these people who don’t have a lot of money? One friend of ours lived for many, many years in a small apartment in the West End. He didn’t have any money to speak of. He just made ends meet. When he got sick, he was placed in a facility far from home and friends, in a room with a straight, elderly gentleman of a completely different ethnic background – someone he had nothing in common with. He was very bitter. He died eight months later.”

It was stories like this that reconfirmed Bill and Manny’s plans. “We decided on trying to create a retirement home for the gay and lesbian community. We wanted to look at something that was doable. Maybe not in our lifetime, but doable. So when we did our Wills in 2008, we included Vancouver Foundation.”

Bill and Manny’s timing is spot-on. And they are right to be concerned, because the statistics tell a disturbing story: Most Canadians are reluctant to talk about – much less plan for – their death. A recent Leger Marketing survey found that the majority of Canadian adults (51 per cent) do NOT have a signed Will.

A recent MetLife study of American gay and lesbian baby boomers found exactly the same result – more than one-half (51 per cent) of LGBT boomers had yet to complete a Will.

LGBT elders are twice as likely to live alone than heterosexual older adults, and four times as likely to have no children. Thus they often have limited access to traditional support networks such as adult children, extended family, or the church, to provide care. Anecdotal evidence suggests that many gay or lesbian couples even end up “back in the closet” rather than deal with the subtle and sometimes not-so-subtle prejudices of some nursing homes. A Will is a document that leaves instructions about what you want done with your personal possessions and land (your estate) after you die. Dying without a Will means letting the government decide how your estate will be settled and then charge your estate to do so.

“In fact, I can’t think of any other foundation in the city that would be suitable for what we wanted to do. There isn’t any, really. Certainly not one with the variety, the breadth of offering that Vancouver Foundation has. You can put money into the arts, into medical research. And you could change your plans if you wanted to. Also, I wanted to know where the money was going. You can give to the BC Cancer Agency but it often goes into general donations – it’s not specific and it’s not separate. Vancouver Foundation has a lot of different components. And we knew there would be oversight on the money.”

Bill and Manny aren’t shouting from the ramparts about gay rights, or flying the rainbow flag. That’s not their style. They are quietly, steadily enabling change. They contribute regularly to their legacy fund, putting their resources to work to create a home for less fortunate members of the LGBT community. Eventually, they hope the fund will be big enough to buy a heritage house in the West End and outfit it to care for elderly people.

“It’s tough if you’ve been renting all your life,” says Bill. “Living for the late nights and parties, and not putting anything away for the time when you can’t, or don’t want to, work anymore. Manny and I have been very lucky. And we want to help where we can.” They are encouraging others to join them. “There are just so many gay people who don’t know what to do. You can will your estate to Vancouver Foundation, or any foundation you like for that matter.

“You don’t have to be a millionaire to contribute. Make regular contributions to your fund to get your tax credits every year. Think about making a donation in your Will to Vancouver Foundation in support of the Rainbow Fund. And on your death, you will be contributing to a very worthwhile cause.”

This is not the end of the rainbow for Bill and Manny. In fact, it’s just the beginning.