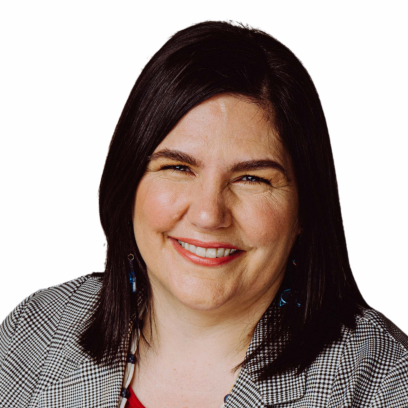 Carmen Lansdowne, Kwisa’lakw, is a member of the Haíɫzaqv (Heiltsuk) First Nation and is adopted into the Ḵwikwa̱sut̕inux̱ Haxwa’mis First Nation. Since early 2017, Carmen has served as the compassionate, thoughtful, and creative Executive Director of First United Church Community Ministry Society and First United Church Social Housing Society where she has led a turnaround resulting in increased organizational stability and capacity. An ordained minister in the United Church of Canada and theologian by training, she maintains academic interests, church ministry, alongside indigenous way of being, parenting, and partnering.

She currently sits on the Board of the Sandy Saulteaux Spiritual Centre in Beausejour, MB, and chairs the national Indigenous Candidacy Board for the United Church of Canada, supporting Indigenous, and non-Indigenous candidates for ministry in Indigenous contexts. She has previously served on the Pension Board of The United Church of Canada (UCC), as well as the governing bodies of the United Church of Canada (Toronto) and the World Council of Churches (Geneva) from 2006-2013. Carmen holds a PhD from the Graduate Theological Union in Berkeley, CA as well as two graduate degrees from the Vancouver School of Theology and a BA, History from UVic. She is passionate about creating a life with great stories and amazing adventures with her family.